A Friendly Church for ALL

All the way from "The Boss" at Old Trafford to the Captain of the BB ! 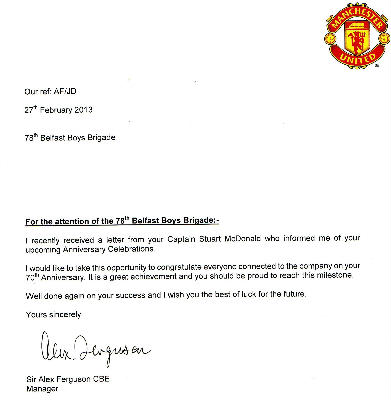 Just in case you find it difficult to read the letter from Sir Alex Ferguson -  It says:-

For the attention of the 78th Belfast Boys Brigade

I recently received a letter from your Captain Stuart McDonald who informed me of your upcoming Anniversary Celebrations.

I would like to take this opportunity to congratulate everyone connected to the company on your 70th Anniversary. It is a great achievement and you should be proud to reach this milestone.

Well done again on your success and I wish you the best of luck for the future.